Yes, I’m back from Japan! Physically at least: my heart is still back there. I’ve been traveling around the country for a bit less than a month, and the experience was incredible. It was a great occasion to practice Japanese and get a better sense for the culture. I’ve read and been told a lot of things before going, and reality felt a lot subtler than what you would expect at first. Some facts were somewhat true, others plain wrong. The collectivism there felt wonderful. The french culture is a lot more individualistic, which is part of what makes me feel like a foreigner here.

There can be a sheer contrast between Japanese people’s behavior during daytime, and at night. When they are tipsy, or even completely drunk, you’re up for all sorts of surprises! And it’s fine for them to drink way too much and end up sleeping on the sidewalk in larger cities.

Anyway, Japan is beautiful. And a picture is probably worth a thousand words in that regards: I’ve mostly been out hiking, meeting people, making friends… enjoying the soothing nature. If you ever travel there, I would warmly recommend walking the Kumano Kodo, a pilgrimage route. At least if you’re into trekking. Oh, and when you’re on your way down to Tanabe City, be sure stop by Osaka and eat some freshly cooked okonomiyaki with cheese topping. It tastes great!

Looking for a proper workplace

Alright, let’s get back to the channel. Last week, I wrote a business plan and applied to a local business incubator. It’s a place where you can get an office, along with other young companies. Experienced people follow your work and are here to guide you. If they accept GDQuest, this will help the project greatly in the coming year. It is getting hard for me to work at home. I need to get out of here. That’s why I took a few extra days to refine the document: I want - no, I need it to work!

Let’s talk about what’s coming next on GDQuest. As far as free content is concerned, until the end of December, you’ll be getting some more Krita tutorials from the Game Art Quest series. In the meantime, I’ll be hard at work on a few things:

And hopefully we’ll find some time to do a few collabs with other artists. We got in touch with Daniel, aka Borodante (pronounced Borrrrr-rodante), and some other tutorial makers.

Come chat with the community on Discord! 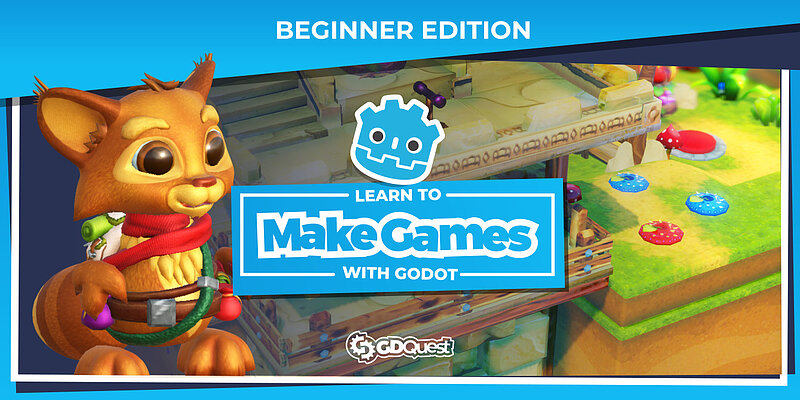 I am new to programming

I’ve opened a server on Discord for everyone in the community to join and talk about game creation with open source programs. Whether you just want to drop by and say hi, showcase your artwork or share your knowledge about Krita and Godot, you’re more than welcome!
Join the Discord server

Sara Tepes, a hard-working 17 years old illustrator, talked about GDQuest in her last video. I’ve been following her for months now, and her message was heartwarming! So now it’s my turn: if you want to see appealing live Krita demonstrations, check out Sara’s channel on YouTube. She uploads commented time-lapses every week and she already produces very appealing art despite her young age.

Time to get back to work! I’ll upload the Krita brushes update in the coming week (Nov 14-20), as well as a video overview of the new features in Krita 3.1. Yes, a new major release is right around the corner, and among other things, it’s going to be the first stable Mac version!

Thank you for your time! Nathan

PS: If you want to see more shots I took in Japan, click on the picture below. It’ll take you to the album on Flickr.