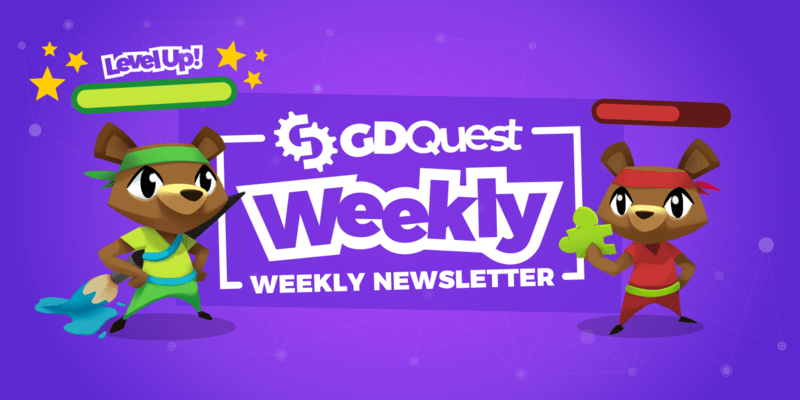 This week, we’re coming to you with new Godot tutorials, shaders, and visual effects.

We have new Godot shaders to share with you: We started working on a collection of free and open-source tutorials, the Godot mini-tutorials. They all go straight to the point. They present one problem and provide an efficient solution.

We looked around the web to see what was missing and felt there weren’t many audio resources, so we started with that. Here are the first four mini-tutorials:

Johnny also worked on a shader tutorial dedicated to gradient mapping, an essential technique used in many shaders.

The demos we made for these tutorials are, as usual, free software. You can find them now on GitHub: Godot mini-tuts demos.

We want to keep producing free learning resources like these for you. To do so, we’re preparing a new crowdfunding campaign and our next big project. I’ll let you know more in the next GDQuest weekly.

Johnny and Henrique are working on new special effects.

This week’s highlight is lightning. Johnny is working on adding the ability to chain lightning strikes between neighboring targets. You can already play with it: it’s up in our Godot Visual Effects repository.

ConceptGraph is a procedural modeling application made entirely in Godot. It started as an add-on, and the author is now turning it into a standalone program. You can learn more in this video preview

Tips of the week

This week’s tip is about efficiency and optimization: when working with Godot, you should favor built-in nodes over custom GDScript or C# code!

There are at least three reasons to pick built-in nodes first:

When it comes to performances, some examples might surprise you. For example, using Area2D can be way faster than checking the distance between nodes using code like global_position.distance_to(target_node.global_position).

You still want to be thoughtful and only use built-in nodes if they solve your problem. That’s why I recommend you to favor them. There are cases when a built-in feature might not quite provide the logic you need. For example, the state machine built into the AnimationTree can be useful to manage animations, but it’s not design to offer a complete finite state machine to write gameplay logic.

And that’s a wrap for this week. See you in the next one!